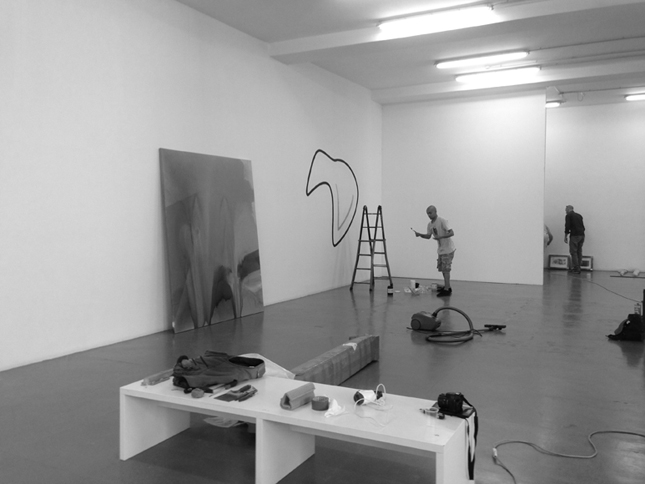 ERRATA
You never know where you are
CORRIGE
You’re never where you know
Giorgio Caproni: Il franco cacciatore, Einaudi 1973.

The expression quai (masculine noun in French) means dock, but also riverbank, levee,quayside.It is a border land, indicating the end of a spatial or geographic whole and at the same time it indicates the beginning of a new territory, a new horizon towards which we find ourselves directing our attention. If the quai, from a purely material point of view, offers a real and viable space, it simultaneously becomes the bearer in immagine of a liminal condition, of a process of encroachment and superimposition among the elements that lap both banks. Metaphorically we can visualise it like a boundary, an edge, a turn, a long thin piece of land, capable of opening up on both sides, sensitive to the turn of things, to the metamorphosis of form, to the possibilities of language and sense. Not only can it be intended as a privileged place, the distance by which the artist defines his way of reading reality, of giving it form, substance, dimension, but it also becomes the horizon that opens out in the work itself, a kind of trace that carries within itself simultaneously the idea of loss and the idea of contact, remembering the Benjaminian concept of “dialect image”.
Via a visual path made up of works by authors belonging to different generations and with research defined by autonomous expressive requirements, and in some cases meeting formal logics that are apparently opposites, the expression quai becomes the word through which one returns to visualise the work’s space as an essentially poetic space, subtracted from rigidity and linguistic or behavioural conventionality, a source of the possibility of sense and of one of its movements, even if only in terms of a continuous encroachment. The work becomes the custodian of a restless sign, a sign that would seem to set itself, ambiguous and continuously renewed, always beyond the same, “as compared to a technical work” as Nancy writes, “that exists for itself, possessing a function and value of its own and carrying its purposes within itself”. Thus within the gallery there is a winding path made up of places, rather than works, autonomous and together interconnected among themselves.
From the investigation on the body and identity carried out by Urs Luthi of the forms that are born from a kind of archaeology of the memory practised by Giuseppe Gallo, as cultured and humanistic in his aesthetic references as he is aware of the irreducibility of our kind; from the delicate epiphanies of the works of Eva Marisaldi that span daily life, that reveal in a play of discards and logical and emotional postponements, the unpredictability and expressive richness, to the organic and light condition of matter in its becoming image, formulated, between differences and affinities, by the works of Alessandro Piangiamore and Pier Paolo Calzolari, up to the abstract horizons of Jaroslaw Flicinski and David Simpson, as silent and suspended compared to that which surrounds them as they participate in the world thanks to all that their surfaces manage to absorb both in symbolic as well as factual terms. Forms, materials, objects, colours all therefore, end up filling and modelling this portion of space that fills our field of vision and it is through this meeting, based on a process of continual questioning of reality, that reality itself returns to being a mobile field, unhelpful, open and perpetually about to become.
Questioned on what relationship could exist between a car and a sculpture Alberto Giacometti will answer thus: “Cars, like all machines and all those objects that pre-date mechanics, have nothing in common with sculpture. Every object must be finished so that it functions or can be used. The more it is finished,
the more it is perfect, the better it will function and be more beautiful. An object that is perfected dethrones that which is less so. No sculpture will ever dethrone another sculpture. A sculpture is not an object; it is a question, a query, a reply. It can never be finished nor perfect (….). A car, a broken machine, becomes scrap metal. A Chaldean sculpture broken into four pieces: produces four sculptures, and each single part is worth the whole and the whole, like each single part, remains full of strength and actuality”.