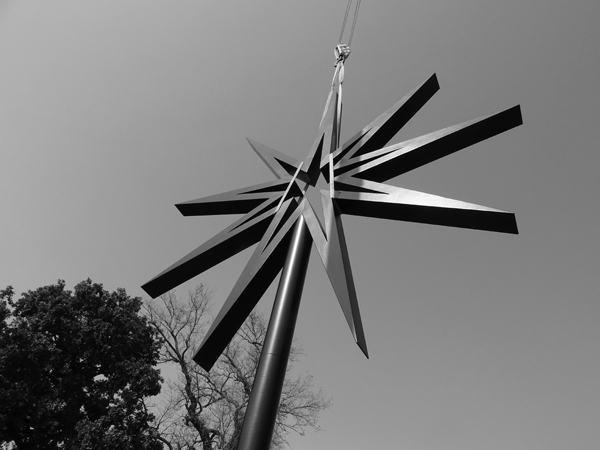 The Star stands on an elevation next to the place where I swam for the very first time. This was on a sweltering July afternoon in the early 1970s. I entered the lake and, in the presence of a few people who did not bother to pay too much attention to me, swam the backstroke, looking at the sky. I felt an overwhelming pleasure of free movement in the water. I distinctly recall my coming to recognise the significance and possibilities of my new movements, which offered me so much unprecedented freedom.
I came to Poznań for one day in the spring of this year. Quite by chance and to my great surprise, an hour later I found myself in Strzeszynek. I saw the same lake, the same meadows, higher trees and bushes, and a changed restaurant, where one could still vicariously recreate its interior from years before.
A telephone rang in my Portuguese home. An old friend of mine felt obliged to notify me about the death of our mutual acquaintance. I also learned that another friend of ours, by the same name, had passed away somewhat earlier. Hardly had our conversation ended when I had already sketched in my mind a design of a star against the sky. This was two weeks prior to my arrival in Poznań.
I was once commissioned a painting from the Flowers series. Once it was completed, I telephoned to say that it was ready. After a moment of silence, I heard a voice in the receiver saying: “My Mom has died”. I went back to the painting and added stars in the empty squares between the flowers. This marked the beginning of the Flowers and Stars series.
I spent the first days of 2001, full of prophesies for the new century, when nothing pointed to the confluence of events to take place soon afterwards, at the home of my friends near Bordeaux. I was taking pictures of the sun. My paintings had shifted to murals composed exclusively of stripes and large circles. Looking at a photograph of a radiant bright sphere, I decided to change the circle into a pointed star. I first cut out a simple drawing in paper and in the morning blew it up on a white wall and filled up with white, shiny paint. The house has stood there until now and one of its walls still features the White Star, but the house has for many years not been the same; it is completely different.
Everything is in a continuous state of flux. To some extent the changes can be foreseen; sometimes their direction can be changed but they cannot be forestalled completely. Reality simmers like a huge ocean of magma and creates ever new structures. Each day, at any given moment someone goes swimming for the first time in their lives or closes their eyes for the last time. We are somewhere in between.